My personal research focuses on sources and effects of the biological phenomenon oxidative stress. Oxidative stress is one of the central factors in aging, age related diseases, and typical “lifestyle diseases” of the Western civilization like metabolic syndrome, including different conditions like obesity, high blood pressure and dysglycemia that are all associated with chronic low-grade systemic oxidative stress.
Due to both their abundance and role as function carriers in cells, proteins are the main targets of damage and (irreversible) modification mediated by oxidative stress.
The main system in cells, responsible for both recognition and remove of (oxidatively) damaged, un-/misfolded proteins, as well as for the permanent regulation, fine tuning and turnover of the functional proteome is the so-called ubiquitin-proteasomal system (UPS). Also, there is evidence that the UPS is redox-regulated, and consequently, oxidative stress has a regulatory effect on both UPS-function and composition.
Taken this together, it seems obvious that oxidative stress, (not only) induced by metabolic stress, may also affect the function of the UPS and thus, the whole cellular protein pool, proteostasis and functionality.
Fluorescence and confocal microscopy are key aspects of my experimental approach. Therefore, it is easy to see, that this page is mainly about immunostaining and following evaluation of the data obtained.
A few words about oxidative stress
How is oxidative stress defined? According to D.P Jones oxidative stress is “a disruption of redox signaling and control” [link].
Consequently, “real” oxidative stress is an extreme state, disabling all redox-regulated cellular systems that could counteract by induction of the cells antioxidative machinery. In such a state, most mammalian cells will decay within hours. An animal in a state of “real” systemic oxidative stress would also die within a very short time span.
Nevertheless, diseases associated with (chronic) inflammation (like diabetes, obesity, atherosclerosis, Alzheimer’s and other neurodegenerative diseases) are considered as (chronic) systemic oxidative stress. Though, this is not true according to Jones definition, since the “redox signaling and control” of the according animal is far from being disrupted. It is shifted, sure, but not disrupted. Patients suffering from diabetes, a neurodegenerative disease or obesity do not die within hours or days – they can live with their disease for years or even decades.
Consequently, in animals living for a long time in a chronic inflammatory state, the term “chronic oxidative stress” may be specified as “chronic redox-shift”. This redox-shift leaves cellular redox signaling and control still functional but shifted to a more oxidative state. This state induces a chronic antioxidative cellular response that is also detrimental but manifests slowly – after years or even decades as long-term consequences like stroke, diabetic foot syndrome, cancer or neurodegeneration.
I don’t say talking about “oxidative stress” in an animal is generally wrong – because this statement would be wrong. But the term may be unprecise in some cases and the formulation “chronic systemic redox shift” may be more precise.
A few words about the ubiquitin-proteasomal system (UPS)
The proteolytic core of the UPS is the so-called “20S proteasome”. 20S is a barrel shaped large protein complex, formed of an overall of 28 single subunits. Those subunits are arranged in 4 homologous rings, each one containing 7 different subunits. The four rings are arranged in the sequence alpha-beta-beta-alpha. The alpha rings are composed of alpha subunits (alpha1 to alpha7) only, while the beta rings are composed of beta subunits (beta1 to beta7) only.
Please check the following figures (01-03) for more detailed information about the 20S proteasomal structure. 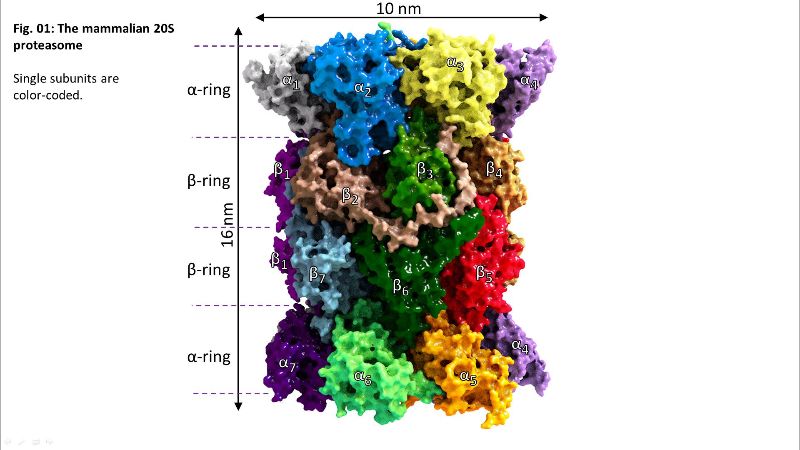 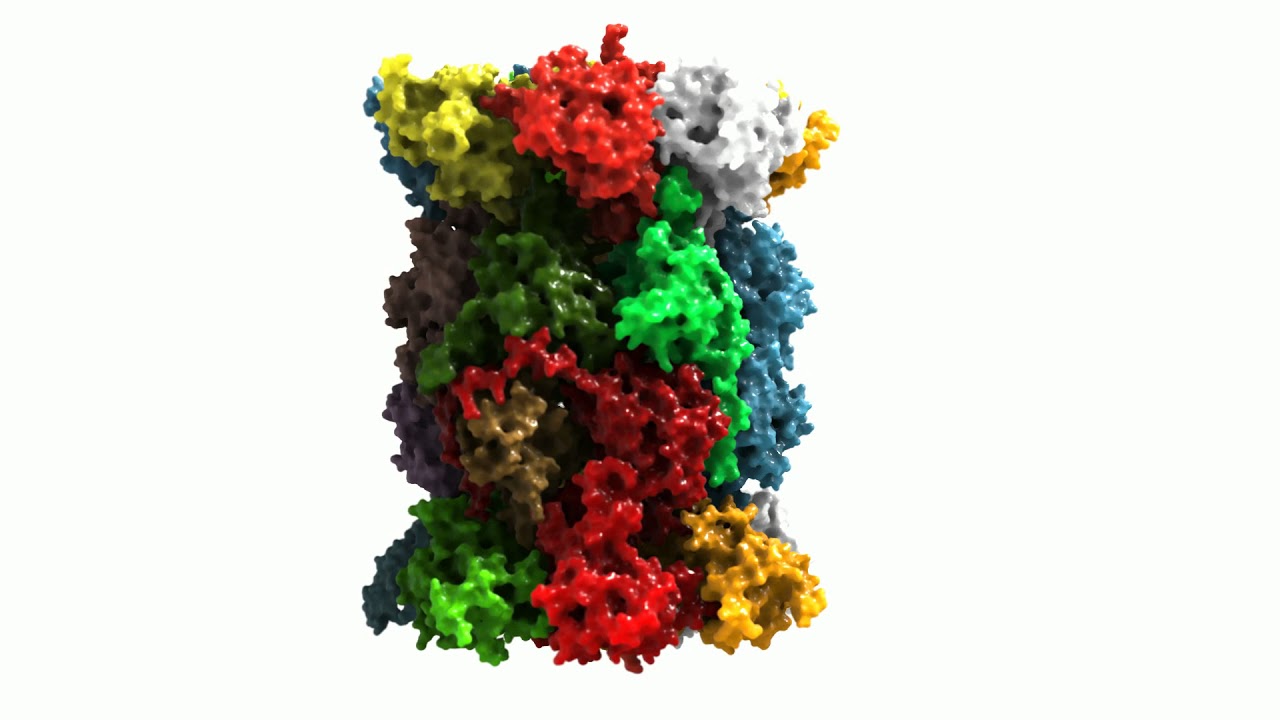 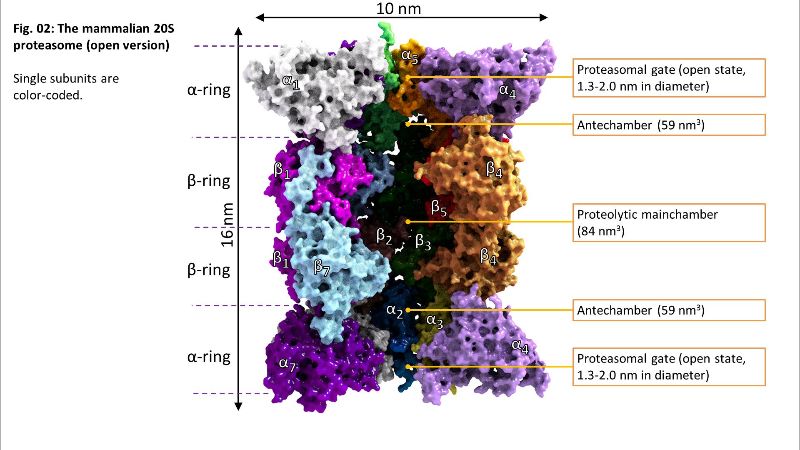 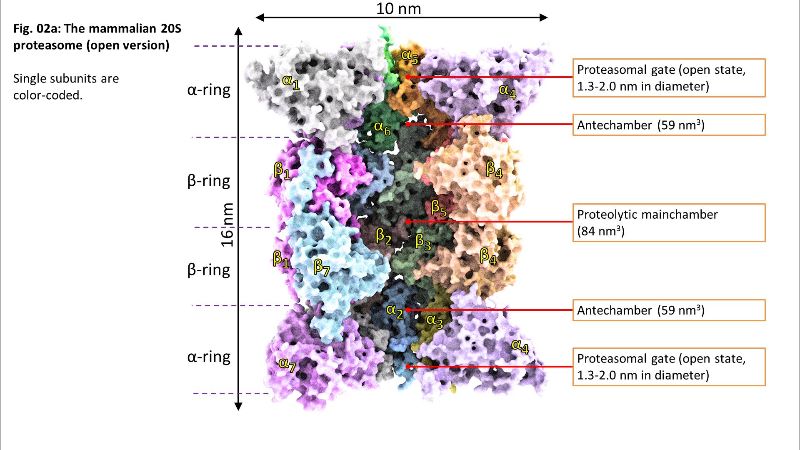 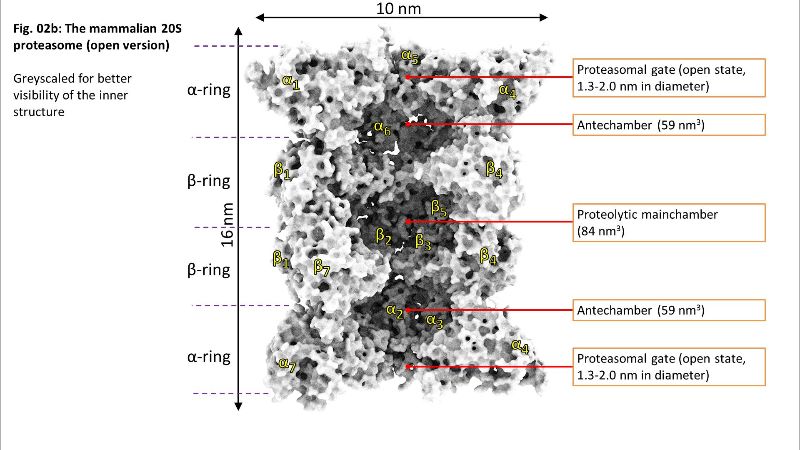 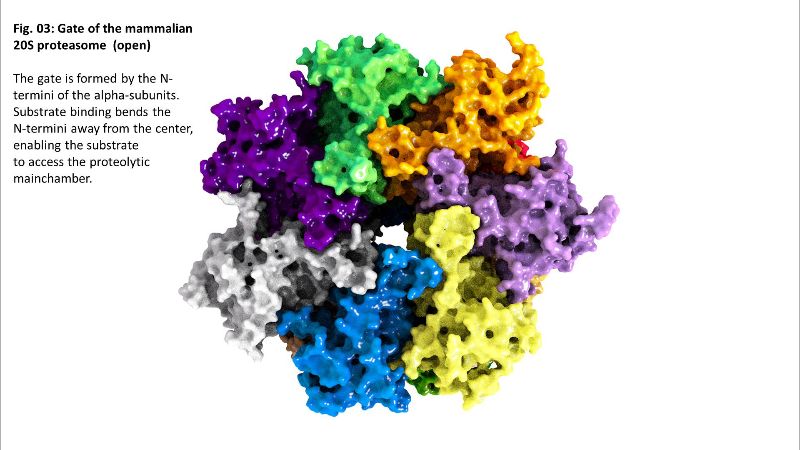 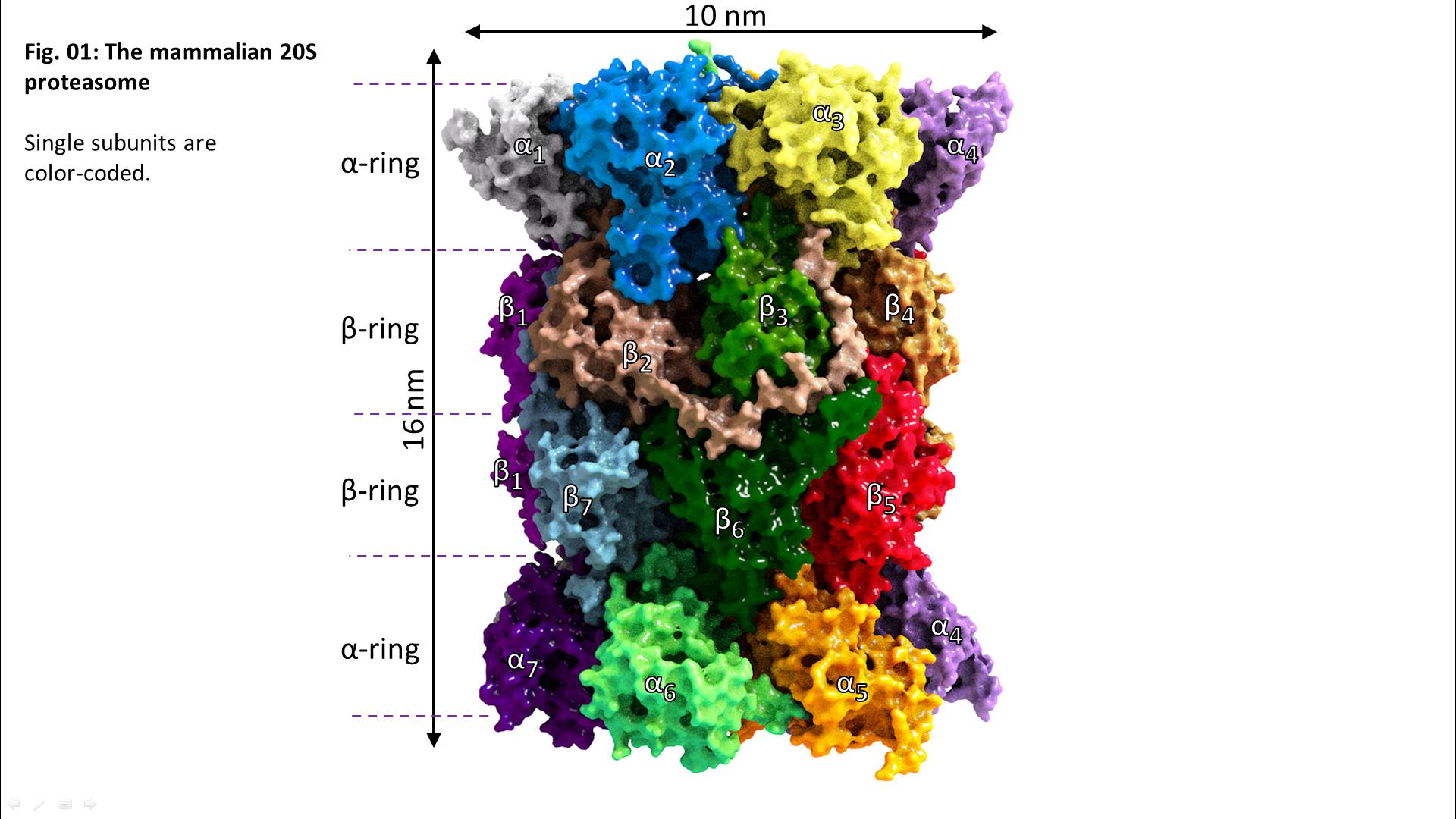 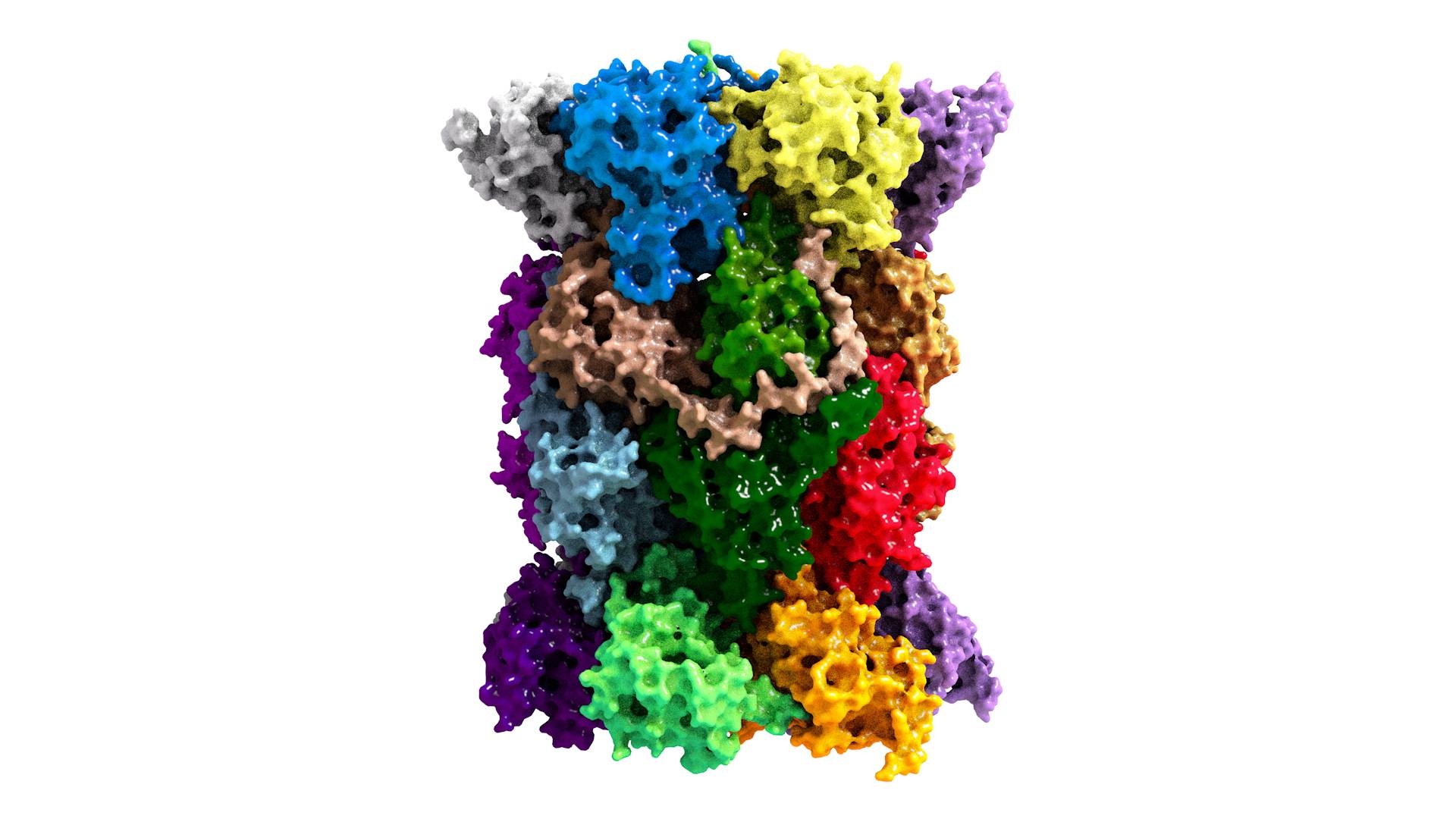 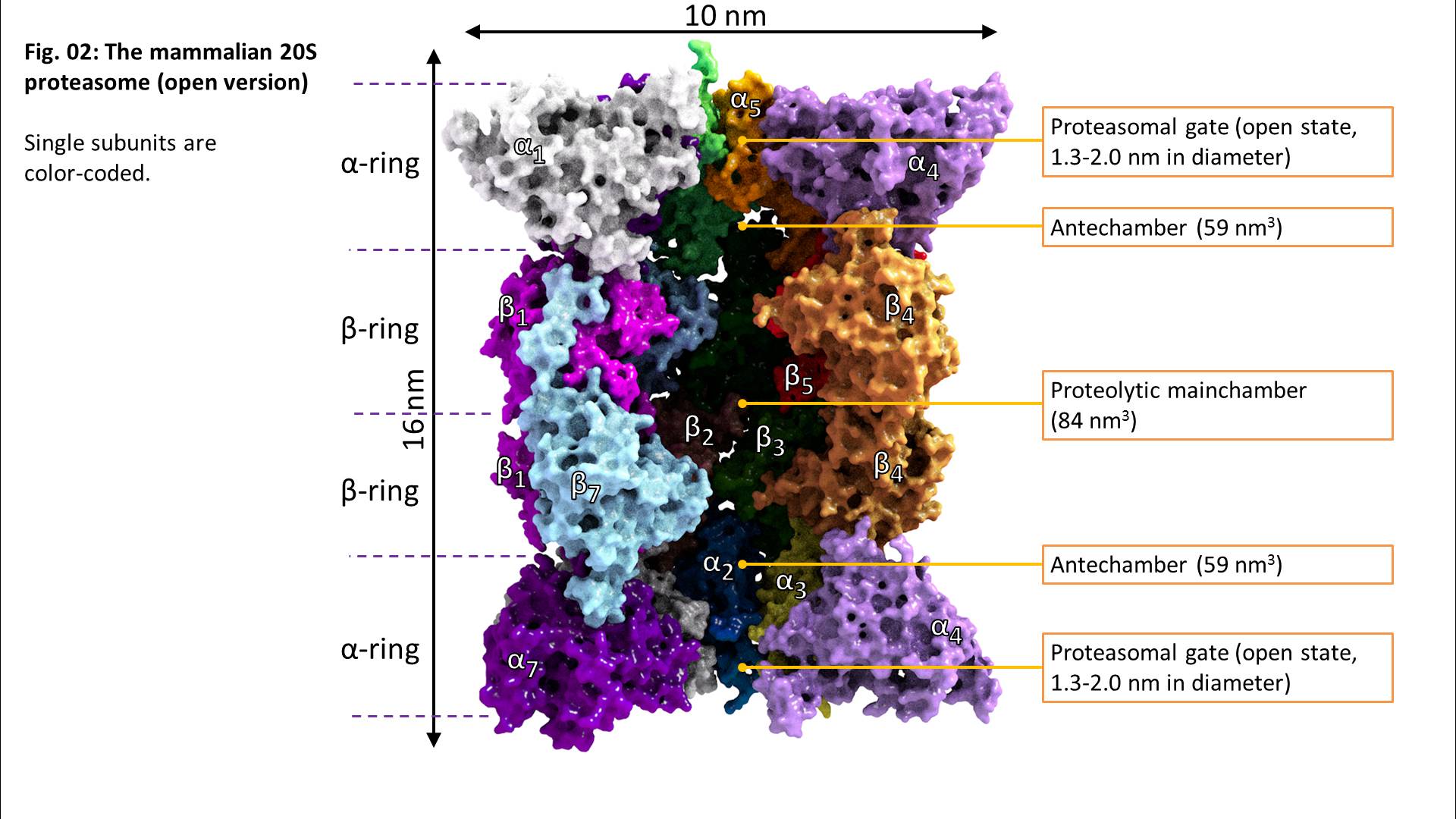 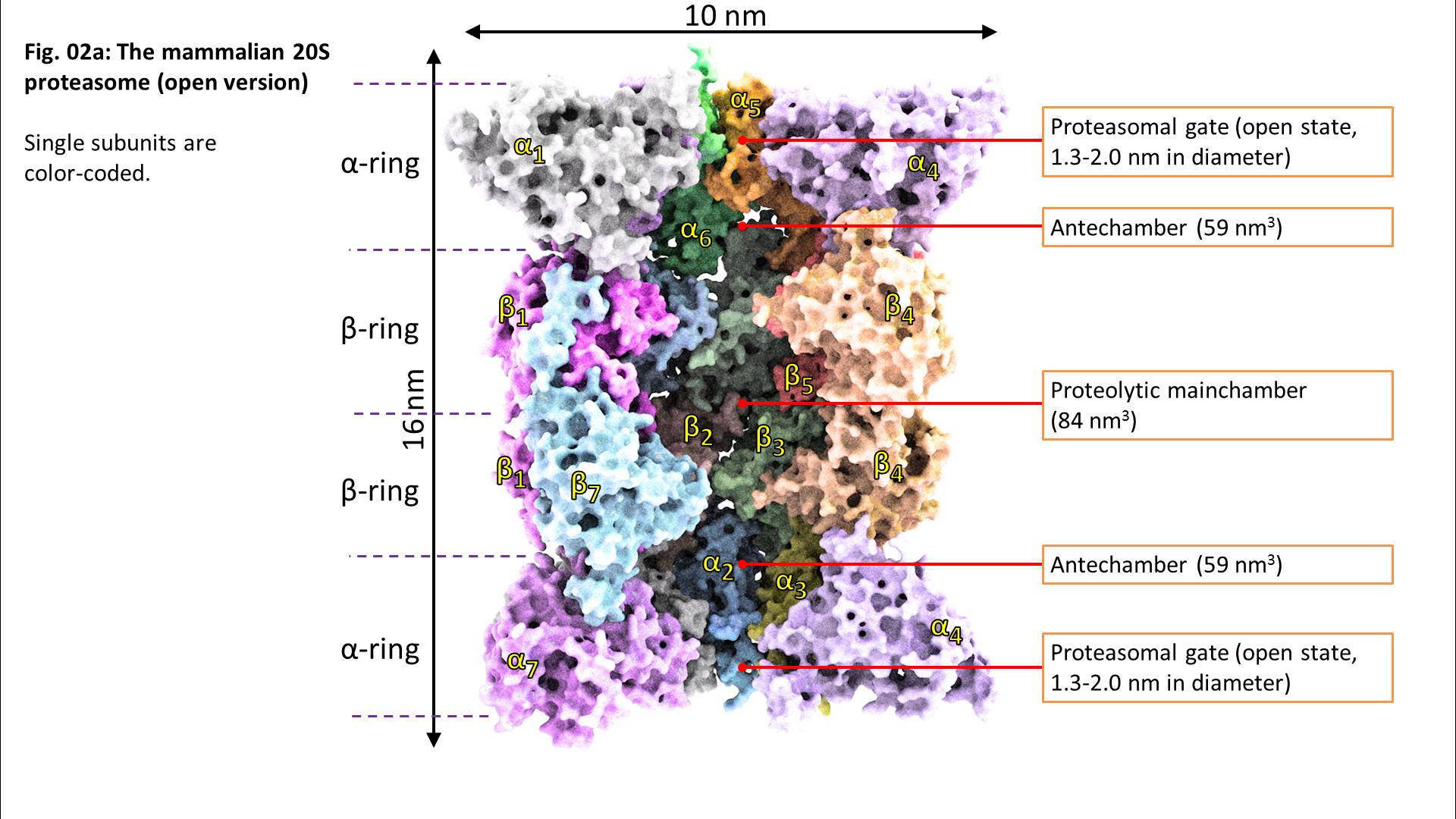 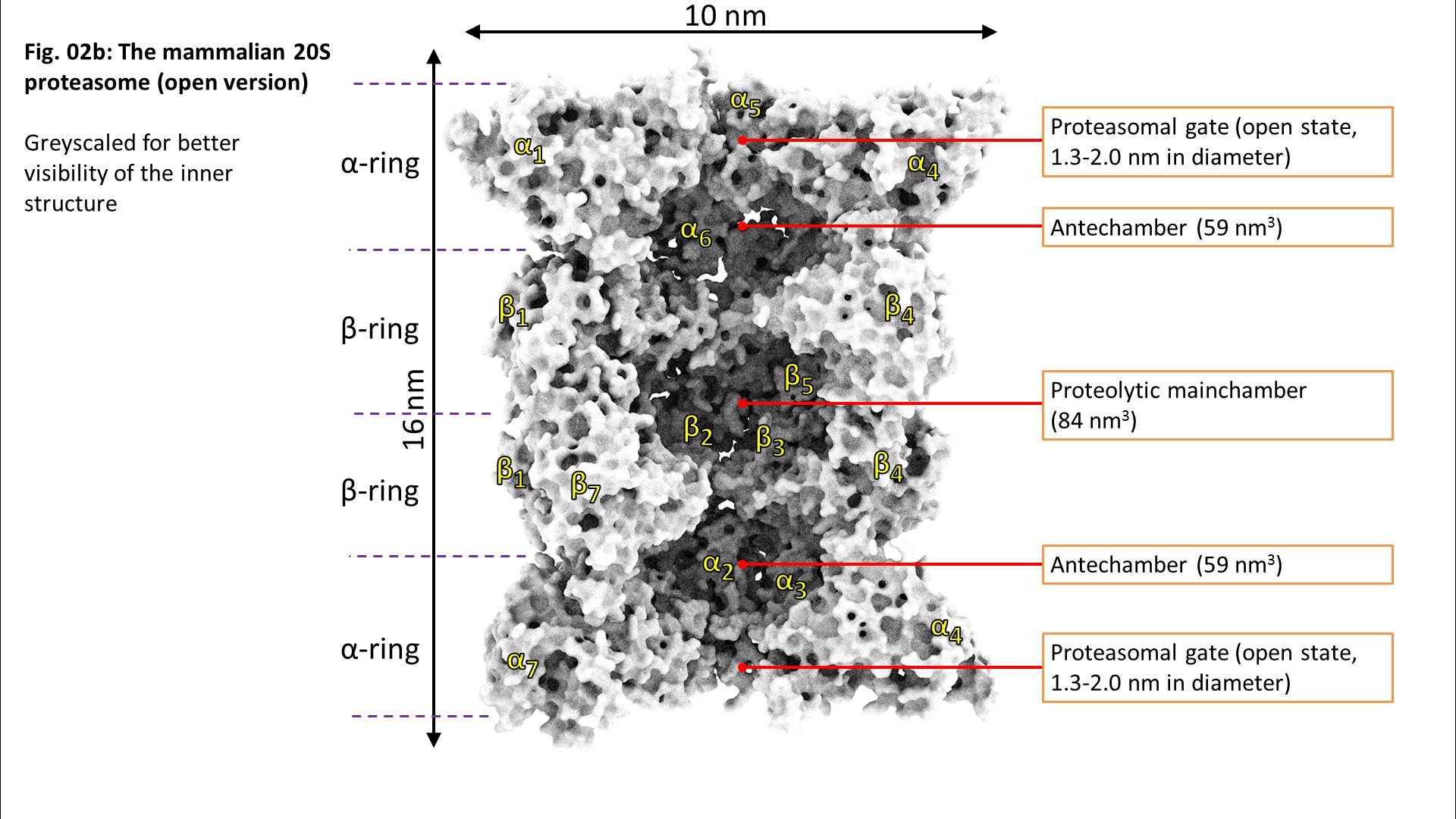 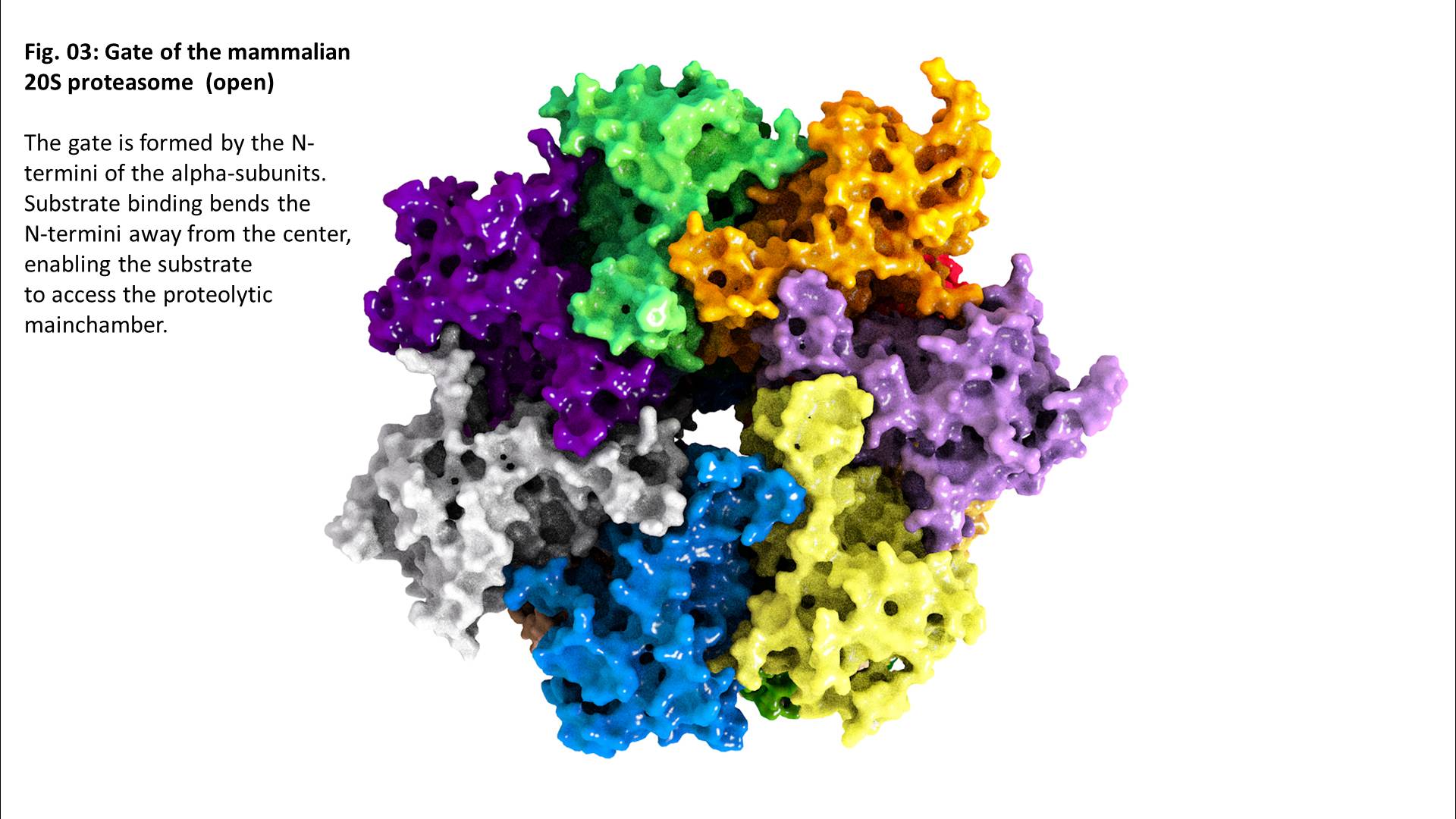 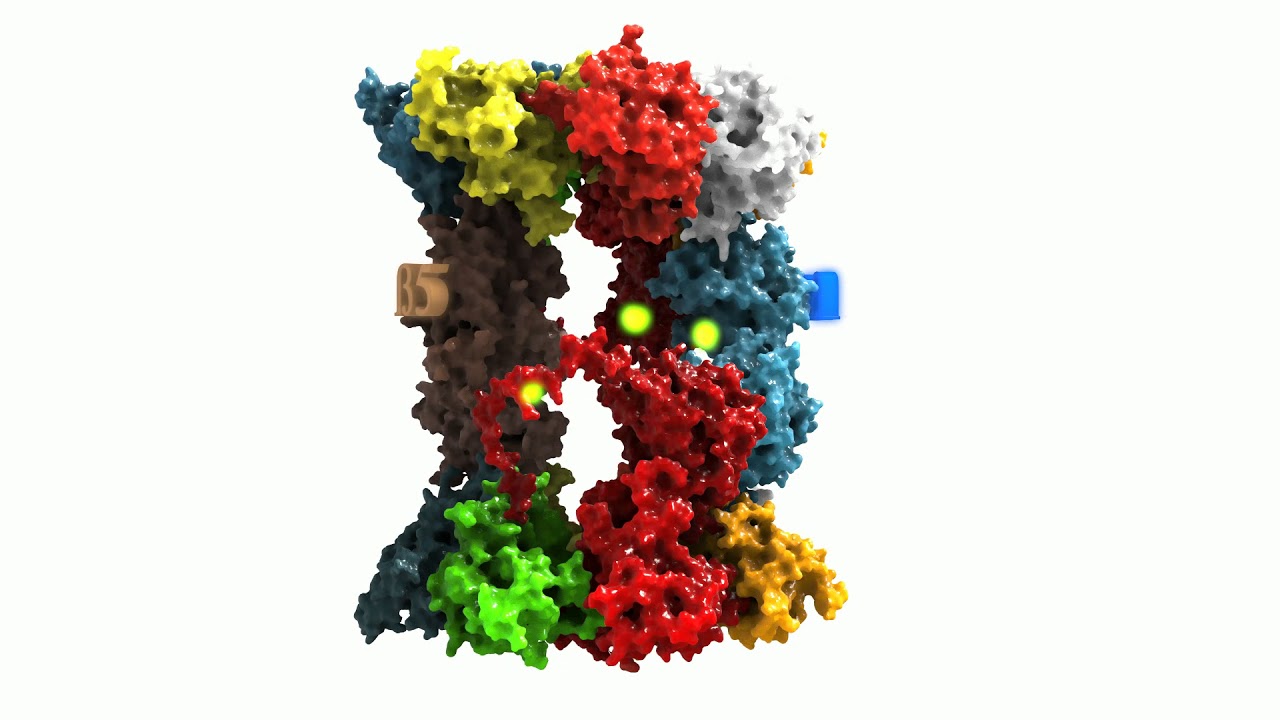 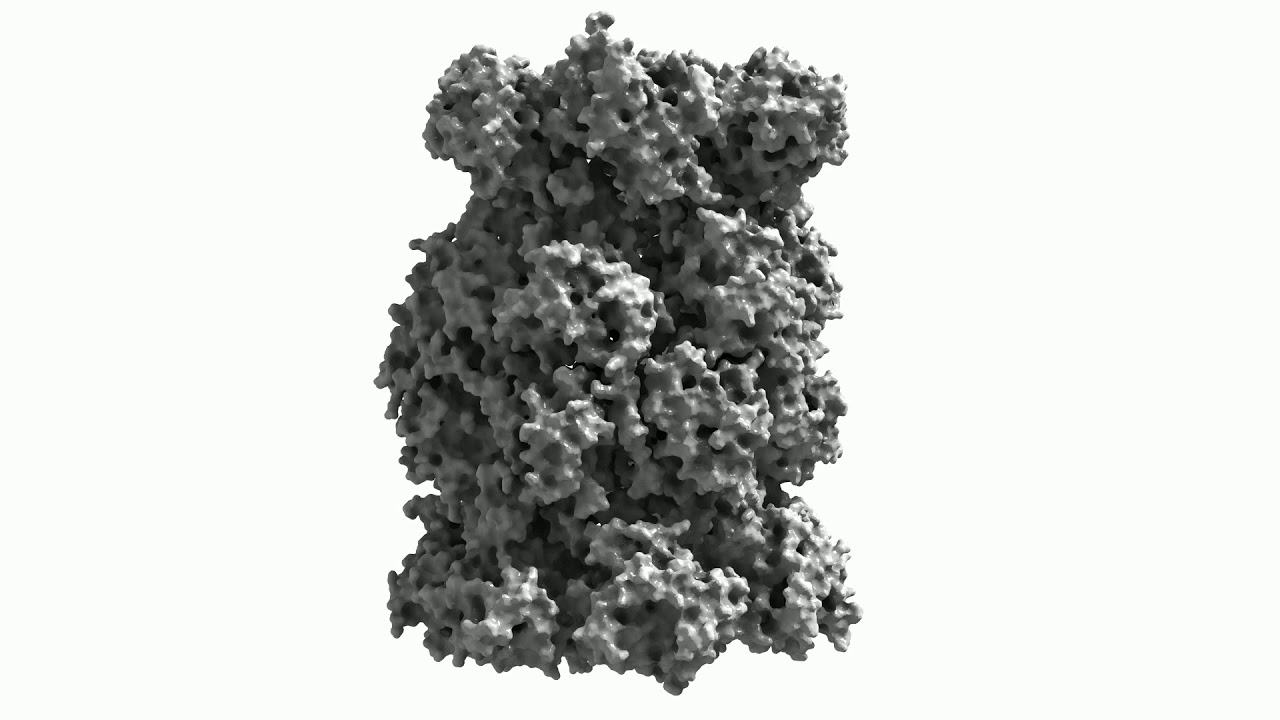 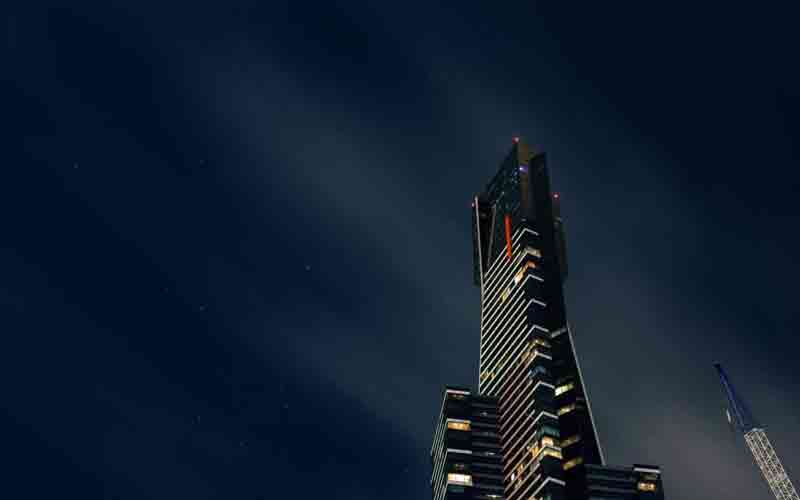 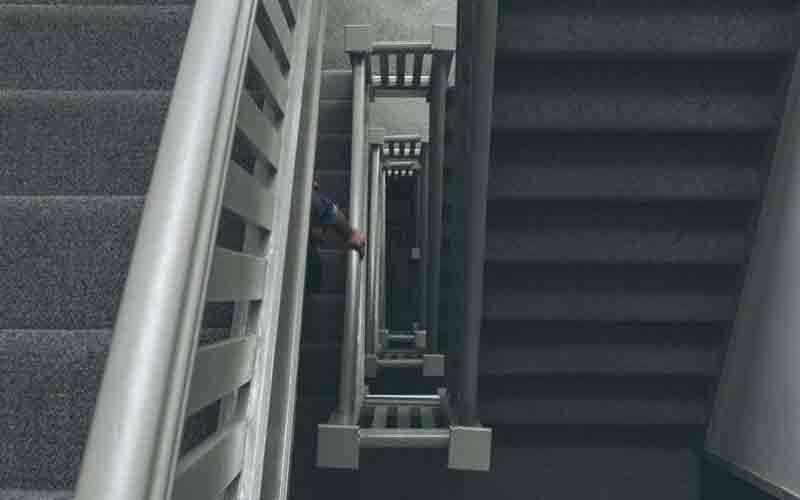 PreviousNextClose
Beta1 reflects a peptidyl-glutamyl-peptide-hydrolysing-activity (caspase-like, cleavage after acidic amino acids, also termed as “post-glutamyl-peptide hydrolytic” activity), a trypsin-like (after basic amino acids) activity is located at beta2 and a chymotrypsin-like activity (after neutral amino acids) at the beta5-subunit. The ratios of the individual activities are beta5 >> beta2 > beta1. Consequently, in most cases, proteasomal activity is determined via quantification of the beta5 subunits and most proteasomal inhibitors are also aiming for that subunit. Mouse mutants with both beta5 and beta2 knocked out are lethal, while beta5/beta1- and beta1/beta2-knockout-combinations are viable.
The 20S proteasome is able to recognize and degrade oxidatively damaged and (partially) unfolded proteins in an ATP-independent manner.
The exact mechanism of substrate recognition is still unknown, but it was suggested that the alpha rings are able to recognize and bind hydrophobic structures that are usually included in the inside of globular and water-soluble proteins, but can be exposed after (oxidative) damage and (partial) unfolding – a substrate recognition that is similar to that of some shock proteins [link].
Binding of a substrate induces “gate opening” of the alpha rings, mounting of the substrate into the inside of the proteasome and its proteolytic degradation into short oligopeptides. Those oligopeptides show different lengths in a range from 2-35 amino acids with three maxima: 2-3, 8-10, and 20-30 amino acids.
From an evolutionary point of view, the proteasome is a very old “invention”, found in almost all bacteria (even in archae, the oldest known bacteria at all), plants, mammals, and fungi. The archaeal proteasome shows the same structure like the “modern” one found in mammals like us – 4 stacked rings, each one containing 7 subunits. But in contrast, the alpha-subunits are identical as well as the beta-subunits, each one carrying a proteolytic center (summarizing 14 centers overall).
During evolution, the archaeal proteasome changed into the modern form found in us mammals. Also, several different proteasomal regulators exist, that can bind like attachments to the alpha rings, providing new/extended functions, usually paired with enhanced proteolytic activity.
The most important proteasomal regulator is the so-called 19S. The 20S “core” proteasome can bind one or two 19S regulators, forming the 26S (19S-20S) or the 30S proteasome (19S-20S-19S), respectively. Though, in the literature, both 26S and 30S are mostly summarized under the term “26S proteasome”.
The 19S regulator contains at least 19 different (currently known) subunits: 6 subunits show an ATPase activity (Rpt1-Rpt6), the others do not (Rpn1-12 and Rpn15). The Rpt-subunits form a hexameric ring, that can bind to the alpha-ring of a 20S proteasome, the Rpn-subunits form a lid-like structure, that enables recognition and binding (Rpn10 and -13) of substrates. The whole 19S-complex has a mass of about 1 megadalton, and is larger than the 20S proteasome it binds to.
Please see the following animation (Fig. 05) for more detailed information about the structure of a 26S (here 10)-20S) proteasome. 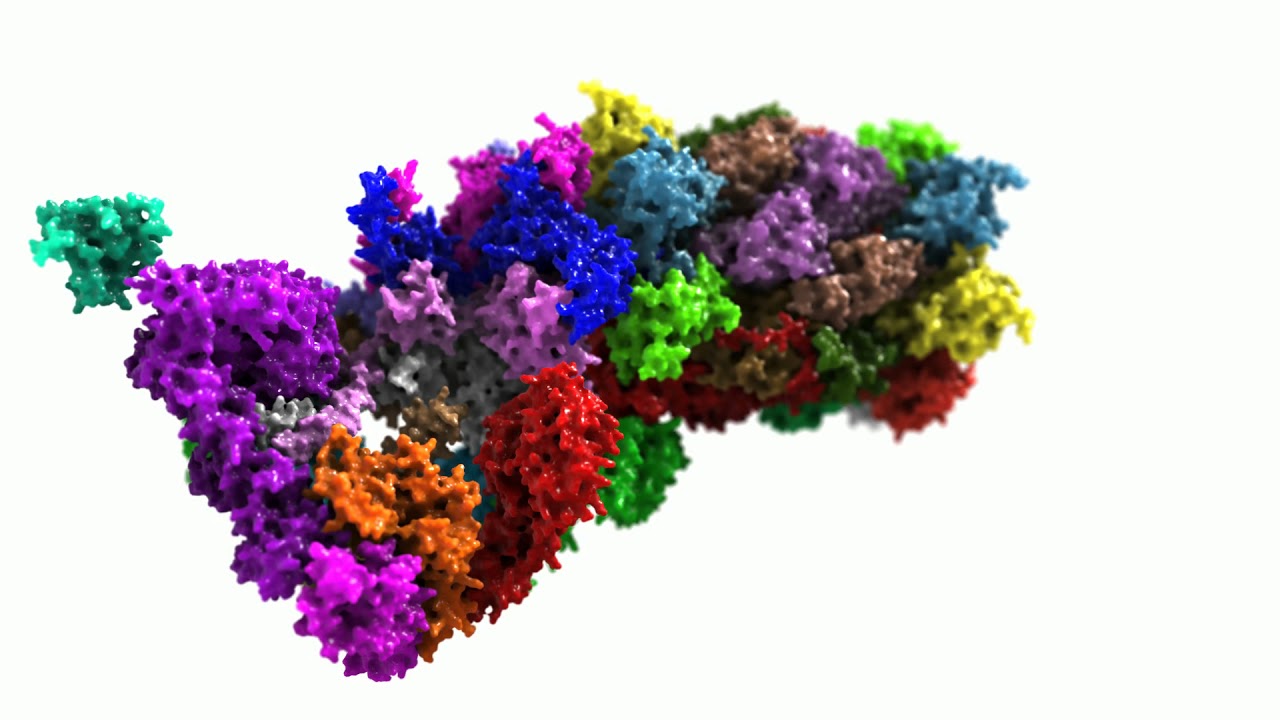 PreviousNextClose
Binding of 19S activates the 20S “core” proteasome (this induction involves the 19S-subunits Rpt2, -3, and -5) and is dependent on the presence of both ATP and Mg2+. The 26S proteasome is the only conformation of the eukaryotic proteasomal form that is able to degrade natively folded and fully functional substrate proteins in an ATP-consuming manner.
The ATP is not necessary for proteolytic degradation of the substrate, it is necessary for unfolding of a natively folded protein, that has to be lift out of it's energetic minimum. It is estimated that the overall of 12 ATPases in a 30S complex (19S-20S-19S) consume about 110 molecules of ATP per minute during degradation, while the typical proteolysis of a protein varies in a broad range from about 5 to about 45 minutes [link].
Labeling of those substrates is mediated by polyubiquitination: a very complex system, involving four different types of E-enzymes (E1-E4), recognizes substrates in a highly specific manner and attaches a chain of ubiquitin (Ub) molecules that provide the degradation signal to be recognized by the 19S regulator. Though, polyubiquitination is not a one-way road leading to proteolytic degradation – there are also so-called deubiquitinating enzymes (DUB), that can also remove the degradation-signal from a protein, saving it (for now) from degradation, resulting in enhanced half-life. The regulation of the balance between polyubiquitination and deubiquitination is very complicated [link] and far from being understood.
Thus, the UPS is formed of two main actors, the 20S proteasome, that recognized damaged/unfolded proteins, as well as the 26S proteasome, that permanently turnovers and adjusts the functional protein pool of a cell.
Under physiological conditions, the amount of damaged cellular proteins is quite low, the main task of the UPS is the turnover of the functional ones. Consequently, most proteasomes are found as 26S and to be exactly as 30S, due to the fact, that binding of one 19S to the 20S core increases the probability of binding a second one.
In phases of oxidative stress (and to be also here exactly: under redox-shifts), 19S detaches from the 20S core. This process is redox-regulated, and mediated by reversible posttranslational modification (glutathionylation) of certain cysteine-residues. Furthermore Hsp70 is involved in the detachment of 19S. The 20S core is both activated by the increased amount of oxidatively damaged substrates and PARP-1.
After the phase of oxidative stress/redox-shift, 26S is re-assembled. Consequently, it becomes obvious, that a chronic shift of the cellular redox state also impacts the proteostasis of the according cell.
If you want to read in detail about the UPS, here is a list of publications recommended:
Proteostasis, oxidative stress and aging. Korovila, I.; Hugo, M.; Castro, J.P.; Weber, D.; Höhn, A.; Grune, T. Jung T. Redox Biol., 13:550-567, 2017. Review.
Metabolic Syndrome, Redox State, and the Proteasomal System. Höhn, A.; König, J.; Jung, T. Antioxid Redox Signal., 25:902-917, 2016. Review.
The proteasome and the degradation of oxidized proteins: Part III - Redox regulation of the proteasomal system. Jung, T.; Höhn, A.; Grune, T. Redox Biol., 2:388-394, 2014. Review.
The proteasome and the degradation of oxidized proteins: Part II - Protein oxidation and proteasomal degradation. Jung, T.; Höhn, A.; Grune, T. Redox Biol., 2:99-104, 2014. Review.
The proteasome and the degradation of oxidized proteins: Part I - Structure of proteasomes. Jung, T.; Grune, T. Redox Biol., 1:178-182, 2013. Review.
“The Proteasomal System in Aging and Disease”, Vol. 109 (Progress in Molecular Biology & Translational Science), 1. Chapter: “Structure of the Proteasome” 2012, ISBN-10: 0123978637.
The proteasomal system. Jung, T.; Catalgol, B.; Grune, T. Mol Aspects Med., 30:191-296, 2009. Review.